The top 6 myths about blockchain and cryptocurrencies 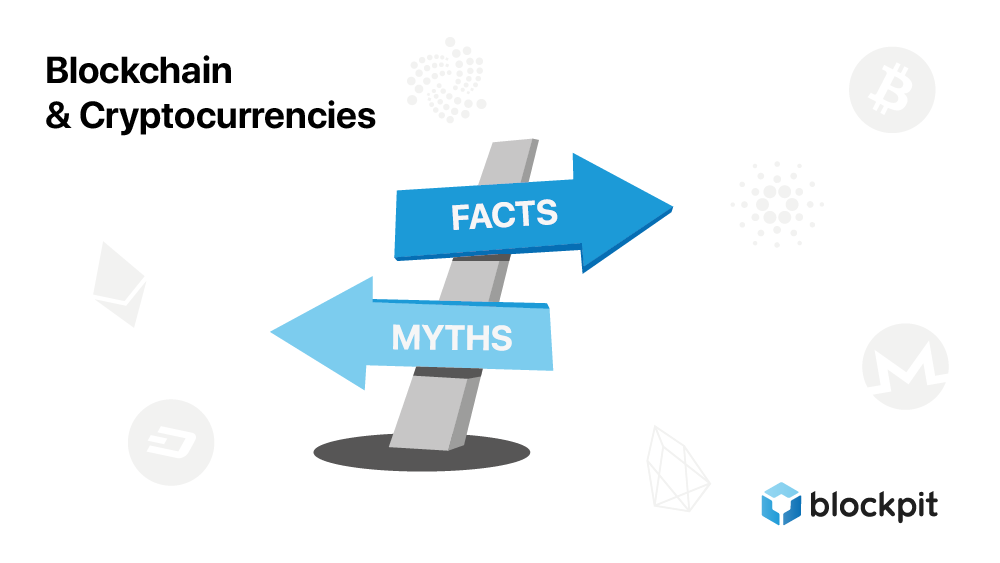 Databases are client-server networks where each party having access to the database can change a master copy of the data. Nevertheless, the control still lies with a central authoriy, usually the administrators of the database. Other than that, within a blockchain network, each participant maintains, calculates and updates new entries. All nodes are working together to ensure the same conclusions. Another major distinction is the duration of how long data is stored. Traditional databases keep information up-to-date at a particula moment whereas blockchains don’t only show real-time information but also include the history of all data. Thus, we can speak of an evoluation of databases to stores of records.

Myth Nr. 2 – Blockchain is public, thus everybody can see private data
“Anyone can access the blockchain” and “anyone can read transactions”. Well, those statements, without question, are true. Yet, it definitely does not mean that because of the distributed ledger being public everybody can access your information or transaction details. Transparency is one of the top arguments for blockchain technology and yes, everybody has the possibility to download the code and have a look at the different blocks. But what is stored on a blockchain is only the amount of the transaction and a hash. Both stem from the process of cryptographing the underlying data. Therefore, it is impossible to obtain or view other information.

But there are different types of blockchains which are based on different levels of transparency and access:

To conclude, no blockchain openly shares private data but there a different gradiants if everyone can see that a transaction was made or not.

Myth Nr. 3 – Cryptocurrency transactions are anonymous
Following the discussion about privacy in the paragraph above, myth number three too deals with the anonymity of blockchains and cryptocurrencies. Yes, the blockchain technology is based on anonymity but still everybody has to be aware that transactions are shown on a public ledger. This (as mentioned above) does not say that everybody can view your private information, yet transactions can be traced back to particular wallet addresses. Thus, transactions may be anonymous when it comes to the data they include but still they leave a path which can be traced back. Some exceptions exist through privacy tokens which use additional layers of privacy for a transactions but in general the tracability cannot be eliminated.

Myth Nr. 4 – Cryptocurrencies are tax free
The pseudo anonymity of cryptocurrency transactions leads to another myth: “I don’t have to pay taxes because no one will know about it.” Well, this definitely is not true. Although the crypto space in its beginning evolved without actions being taken by governments or regulators, it is now an essential issue on the agenda of authorities or companies around the world. One of the topics included in this discussion is taxation. The governments thrives to get its piece of the cake of cryptocurrency profits made by their residents. But by average around 8% of all cryptousers around the world pay taxes on their cryptocurrencies. Why? Because most of them think that the government does not have the ability to trace back profits to a sinlge person and yes, they might yet need to develop a process to do so. Nevertheless, there already are ways that help authorities track back cryptocurrency users and urge them to pay their taxes.

Myth Nr. 5 – Blockchain is 100% secure
There are two main factors which promise great security for blockchains: cryptography and a consensus protocol. Each block in a blockchain gets its unique cryptographic fingerprint which is based on the blocks it follows. Thus, if you want to change the fingerprint for a block you have to change those of all subsequent blocks too (which is nearly impossible). Additionally, the process of the whole network agreeing on the transactions to be true or not, thus sharing the same history, provides a theoratically tamperproof system.

Whole lists of “failures” of various blockchains, hacks or any technical issues are decorating headlines in the news, contradicting this theoretical 100% security as there are ways to trick the system. In many cases they can be found where a blockchain is coming upon humans thorough adjacent applications. Those applications based on a blockchain in many cases provided a point of failure which hackers focused on with pleasure.

Myth Nr. 6 – Blockchain is a “truth machine”
The consensus mechanism of a blockchain is in fact a necessity to provide a decentralised peer-to-peer system. It underlies the decision making process in a blockchain network and aims to reach decisions agreed upon by the network in the best interest for the whole group. Although the majority of the network has to agree on data on the blockchain this does not guarantee full truth and accuracy of the information.

First reason for this is the notable security flaw called “51% attack”. The term describes a situation where more than half of the nodes gather to tell a lie, this lie will be the “truth” portrayed on a blockchain. Furthermore, blockchains cannot assess wheter an external input is accurate or “truthful”. Neither do they know, if the data and information on off-chain assets are true, nor can they promise accuracy of digitally represented data on a blockchain. To put it into a nutshell, what is true on a blockchain is what the majority of nodes agrees upon to be true.

If you have any other exciting myths for us, which we should present in a second blog article, please write to us at support@blockpit.io.