Coin series – what you need to know about cryptocurrencies 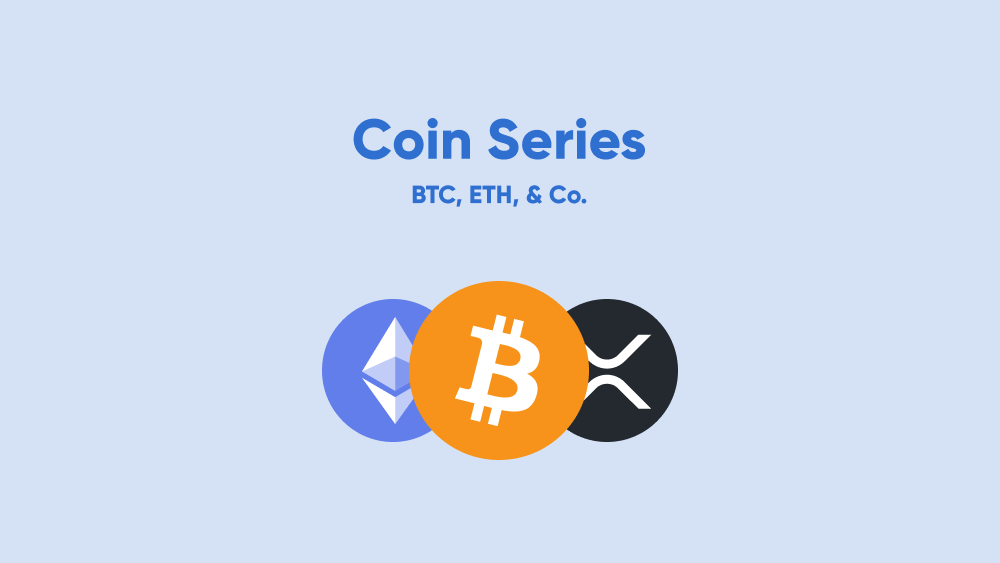 The topic of cryptocurrencies and their rules is once again on everyone’s lips, that’s why we present a new coin every two weeks in our new blog series in order to give you an insight into Bitcoin & Co. But first we would like to give you a general overview about cryptocurrencies and their definitions like wallet, mining and many more. We have deliberately kept the explanations & definitions very simple – the subject itself is usually much more complex in reality.

Wallet
The wallet can be compared to a money purse. In its core, it is software that stores addresses and the corresponding secret keys using high security standards. It can be used to receive and send digital coins and tokens, usually without having to enter complicated combinations of letters and digits. Such wallets are available, for example, in the form of apps & browser applications, but also as hardware (e.g. Ledger, Trezor, Cardwallet).

Blockchain
A blockchain is a chain of data blocks, each of it contains transactions. Therefore it is a list of transactions that are linked together based on cryptographic procedures. The individual blocks contain a hash of the preceding block, a time stamp and transaction data to make manipulation almost impossible.

Mining (Proof of Work)
"Mining" is the name given to a process in which computing power is provided to manage any processing of transactions into blocks. The proof-of-work is used by Bitcoin, for example, where the miners check the network and check that all transactions are correct. In order to be able to carry out mining, high-performance computers are now required, which require a corresponding amount of power for the calculation – estimated 20,000 gigawatts per year. There is no approval requirement, all you need is the technical knowledge and the corresponding device.

Staking (Proof of Stake)
Proof of Stake refers to an algorithm with which a blockchain network reaches a consensus on which participant is allowed to create the next block. This is not based on the provision of energy by hardware (as in mining), but on the blocking of a so-called "stake", i.e. a set of assets. A random selection is used, whereby the weights of the individual participants are determined from the duration of participation and/or the amount of assets (size of the stake). Proof-of-stake algorithms make it possible to secure a block-chain network and bring about a consensus without high energy costs. With Ethereum, one of the largest blockchains has set itself the goal of switching from Proof of Work to Proof of Stake in the next few years.

ICO, STO, IEO
ICOs (Initial Coin Offerings)
Are an innovative way to raise capital: A group of individuals creates cryptographic tokens – e.g. on the Ethereum blockchain – and offers them for sale over the internet. Virtually anyone with internet access can participate in the ICO.
Instead of ICO, the terms ITO (Initial Token Offering) or Token Sale are sometimes used.

STOs (Security Token Offerings)
Security token offerings are considered the second generation of crypto tokens. These are fully regulated and tokenized investments that have a clear investment focus. At it’s core are STO’s digital assets on a block-chain basis, which basically comply with the regulations of the respective securities supervisors.

IEO (Initial Exchange Offerings)
The Initial Exchange Offering is a token fundraising event that takes place on a crypto exchange. Similar to ICO’s, start-ups can issue tokens which can be bought by investors in order to claim a certain benefit on the platform or to sell the token profitably in the future. In this case, however, the tokens are issued directly by a stock exchange which acts as Eminent. The special feature of IEOs is the immediate listing on a public exchange after completion of the initial fundraising – this provides immediate liquidity for investors.

Taxes
Since cryptocurrencies are traded on an open market, profits or losses can occur in a similar way to stock trading. Attention: While in stock trading the bank often pays the taxes automatically, this comfort is not available with cryptocurrencies yet. So everyone is responsible for their own tax returns and the penalties for tax evasion are high even if they are unaware! A very detailed explanation of how to tax cryptocurrencies can be found in this blogpost.