The Bitcoin Bull and its Energy Consumption – How harmful is bitcoin? 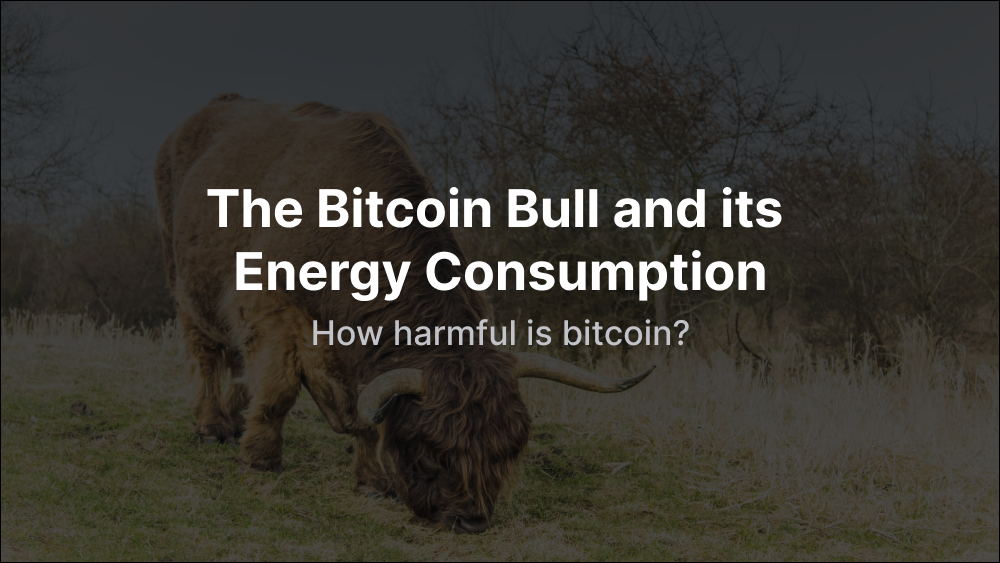 A topic as hot as a summer day in a major city these days.

It is common knowledge that the electricity used for Bitcoin mining as well as for WLAN, smart homes, electric cars, gas station lighting, air-co, gold mines, the financial system and many other things prevalent in our daily lives, does not just come from the power socket.

That is a problem. And not a small one at that because the annual power consumption of Bitcoin mining is about the same as that of the above mentioned city or that of an entire country like Argentina.

One reason for this is the Proof of Work consensus algorithm. In simple terms, the validity of the Bitcoin blockchain is ensured via a decentralized system of participants, the miners. In order to validate a block, which is a certain number of transactions on the blockchain and to collect the associated fees,  miners have to solve number puzzles. To do this they need highly capable hardware and electricity because it’s first come first served. Solving the number puzzles is energy-intensive. This energy-intensive process results in high mining costs and also guarantees the security of the Bitcoin blockchain.

Electricity consumption is a valid criticism of Bitcoin mining that brings up the economic consideration of externalities.

Purely in terms of power consumption of Bitcoin mining, the following picture emerges. Bitcoin miners are typically mobile. Miners congregate where electricity is cheap and available. This is currently in large numbers in rural China, where a lot of electricity is generated by hydropower. Today the big challenge in regards to electricity generation is still storing electricity. Typically electricity production and consumption deviate widely on geographic and time parameters. Renewable energy is no exception to this. As a result, hydroelectric plants often run below their actual capacity. Bitcoin miners can buy up this excess capacity and thus contribute to the profitability of hydropower plants.

This supports the argument that Bitcoin consumes less and better power than it is said to, but leaves open the question of whether there isn’t a system that per se requires fewer resources and at the same time backs innovation.

Proof of Stake – the knight in shining armor?

The Proof of Stake mechanism could be an alternative to the energy-intensive Proof of Work mechanism. Instead of resource intensive computer power, capital is contributed as collateral to ensure the functioning of the Blockchain.

The downside is that the security of the blockchain decreases due to such simplification.

Ethereum has already started the transfer and is (maybe) on the verge of completely switching from the Proof of Work to the Proof of Stake consensus mechanism. Other blockchains could follow suit.

Is there another way to skin this super charged cat?

Miners are not benefactors.  Rather they are motivated by economic rationale and simply buy electricity that is cheap. This of course can also be electricity generated by government-subsidized coal-fired power plants. While the share of BTC mined with renewable energy is increasing, the share consuming fossil fuels is still considered very high. Is this the symptom or the disease?

The high cost required for Bitcoin mining ensures the security of the system. The higher the mining cost, the more secure the system. If this cost is composed of consumption x price, the same security can also be ensured by a higher price of energy costs and a lower consumption by the miners. The view held here is that low energy prices leading to high consumption in Bitcoin mining are the problem. Proof of Work only reflects the high demand for cheap electricity, as Bitcoin is the most effective way to store and transport energy as an economically tradable asset. The system would work just as reliably and securely if electricity prices were higher and consumption lower.

Bitcoin mining is not the solution to government subsidized coal-fired power plants but neither is it the main culprit in their existence. The question of whether Bitcoin is good or bad is not a binary one that can be answered in black or white. The debate about the costs and benefits of Bitcoin is complex and invites informed discussion of the topic.

After all, whatever we think we know today is only the latest state of misconception.